The Mega event Dharmo Rakshati Rakshitaha was organized by Shree Datta Padmanabh Peeth & Hindu Dharma Acharya Sabha at Kavle Ponda Goa in the divine presence of H.H. Sadguruji. This was a historical event to dedicate the Goan scholars for the society – vedic scholars , Upadhya, purohit, ved vidushi, keertankar from Goa all trained by Shree Datta Padmabh Peethgathered came under one roof for this event.

Shivanand Saraswatiji – Founder of Surya Chandra Ashram Rome Italy, Dr. Ketan Bhatikar – President of the event, Adv. Brahmi Deviji, Director Shree Datta Padmanabh Peeth, Deepak Gawas – Head of the Social Department, Tanvi Naik – President of Ponda were also present on the occasion. More than 70 Temple head from Ponda-Goa were honored for their contribution to the upliftment of the society through the principles of Dharma,

During the event a heartfelt tribute was paid to the martyrs of the Pulwama Attack by lighting the lamps by thousands of people gathered for the event. A protest was made against the brutal attack on Indian soldiers by the terrorist in Pulwama, Srinagar. 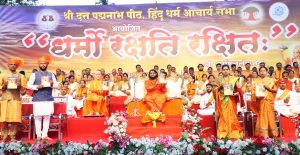