“Tapobhoomi”… Goa’s renowned spiritual hub located at Kundaim in Ponda Taluka has reached great heights due to the incessant efforts of the present Peethadeeshwar of the renowned “Shree Datta Padmanabh Peeth” His Holiness (H.H.) Dharmabhushan Sadguru Brahmeshanandacharya Swamiji. H.H. Sadguruji has been instrumental in reviving Goa’s lost historical identity as “DEVBHOOMI” and not just a hub for tourism-oriented fun and frolic.
This paradise has been gifted with a bounty of natural resources sun, sand and sea, along with powerhouses of positive energy – the Goan temples. The native of this land are culture loving people, worshipping God and tolerant with a “LIVE AND LET LIVE” attitude. Thus sowing the spiritual seeds of Shree Datta Padmanabh Peeth was spiritually conducive here but times were turbulent and tyrannical amidst religious turmoil… yet the Peeth (Cult) sprang it’s rooted firmly with “SADGURU’S” divine intervention for the “VEDIC SANATAN DHARMA”. The Dharma advocates tolerance which is the alfa and omega to live a fruitful life to mankind. The mantra chants, Vedic techniques of worship and meditation taught to crude minds and bodies made them peaceful and optimistic even in turbulent times. This spiritual metamorphosis has been achieved from ages by the Goan layman by divine togetherness and company of the “SADGURU”, thereby helping in Social, Ecological and Political transformation for Goa’s dawn of liberation and freedom.

India / Bharat is a sacred land having a rich cultural heritage. This land has borne a great many saints and religious leaders who have set a universal benchmark in their transcendental knowledge and experiences. Each one has set a history of spiritual heritage through their exemplary lives. Through these saints, the whole of mankind has reached close to Godliness.
All Hindu psychics, prophets, philosophers and Saints have dwelt on the one Vedic concept put forth by our ancient Rishis, Munis and that is the doctrine of self-realization and Moksha “liberation from the cycle of death & rebirth”. The teaching of the Rishis has continued to live in the lives of the followers of Sanatan Vaidik Dharma through the relentless efforts of SHREE DATTA PADMANABH PEETH divine Sadguru Paramapara.
Shree Datta Padmanabh Peeth is performing the work of pouring the divine knowledge of the almighty God throughout the world for over 150 years. The divine work of the Peeth includes a threefold aspect of knowledge, devotion and good deeds so as to establish the Satya Sanatan Vaidik dharma to tread the path of righteousness and attain self -realization. The doctrine of the Satya Shreshtha Eshwari Dnyaan or the divine supreme truth of knowledge devoid of caste or creed, devoid of blind faith or prejudice is the main mantra of the Peeth which has made it eligible for world-famous peace conferences from time immemorial.
Later during the British era, most people were misled by greed and selfishness and faltered in the path of their dharma. As the Bhagwad Geeta mentions that God almighty incarnated himself every time there was a breach in this religiousness and righteousness so as to reset this spiritual fabric of truth and dharma, this was the time the Omnipotent, Superpower reappeared in physical form as the Divine Master “Sadguru” to guide his people who had gone astray and continue the divine work through the Peeth. The divine ancestry or the Sadguru Parampara which began with Sri Guru Naradacharya, Lord Dattatreya has been continued by Shreepadvallabh, Shree Nrusinh Saraswati, Shree Swami Samarth, Shree Dev Mamledar(Shree Siddhapadacharya), Shree Padmanabhacharya, Shree Sushenacharya, Shree Sadanandacharya, Shree Brahmanandacharya, and the present Peethadhishwar H.H. Dharmabhushan Sadguru Brahmeshanandacharya Swamiji.

The Peeth’s first contributions to self and society were commenced by the reverend Sadguru Padmanabhacharya Swamiji. In Goa, Sadguru Sadanandacharya Swamiji sowed the seeds of the divine work by establishing the “Sushen Datta Mandir” at Haturli which was then continued by Sadguru Brahmanandacharya Swamiji through the Tapobhoomi Ashram which is now the most revered, spiritual headquarters of the devabhoomi Goa. And today under the able leadership of the present Peethashishwar the flag of the Peeth has been flying high worldwide.
The Peeth follows “the path of Bhakti, which means to experience the existence of God everywhere”. The devotees follow the path that the embodiment of love will gradually lead our loving mood to that one who is the fountainhead and mainstay of all aspects of eternal love. The Peeth believes in “Guruseva” the core base of its doctrine and teachings.
As the Peeth teaches its followers the doctrine of the identity of the human soul, the Peeth has helped and spiritually uplifted a large number of people. It is the devotion, the great principles, the divine teachings and the universality of Sadguru’s approach, enabled the Peeth to continue for decades receiving recognition all over. The Sadguru endeavors to change the quality of human beings which becomes their proud possession. Besides bestowing the material benefit, Sadguru tries to uplift them spiritually. Infinite disciples cherish the marvelous and miraculous experience about the supreme master “Sadguru” even today. The ignorant, illiterate people who were the victims of the superstitions and were trapped under the belt of deadly vices and whose life was on the verge of certain collapse, surrendered to Sadguru and with the divine touch and guidance of Sadguru once again these people are living a satisfied and flourished life.
Teachings of the Peeth are based on Vaidik Sanatan Sanskriti. This bonding of Sanatan Dharma is exhibited in the form of grand get-togethers organized by the Peeth like Bhakti Mahotsav, Bhakti Brahmotsav, Shrimad Bhagwat Saptah, Bhakti Kumbhotsav, Anushthan Saptah, Silver Jubilee celebration of the divine work of the spiritual hub “Tapobhoomi” etc in the past and through continuous celebration of Satsang and festivals every year in the Muths of the Peeth along with Dattaguruvar Bhakt Utsav on every Thursday which are blessed by the Peethadhishwar H.H. Sadguru Brahmeshannadacharya Swamiji and attended by thousands of devotees. It is a matter of state and national pride that all the temples were brought together under one roof amicably by the Peeth to guide them on the administration of the temples. “Divya Devasthan Sabha” – a grand event organized by the Peeth united thousands of temple administrators who were guided by P. Sadguruji.
The Peeth believes that only spiritual upliftment of mankind is not enough, along with it there has to be all-round knowledge of basic things. The Peeth is committed towards this development and is carrying its activities to fulfill this divine objective. The Peeth has also done a remarkable contribution in the field of education. The Vedic Gurukul of the Peeth imparts the Vedic Knowledge to the students of the gurukul. The residential school of the Peeth “ International Sadguru Gurukulam” is one of its kind focusing on imbibing Indian Cultural values, Vedic knowledge to the students along with academic education. “Sadguru Dnyanpeeth” schools are also started all across Goa to develop the upcoming generation with the Indian ethics. The Peeth promotes the importance of the Sanatan Vedic Dharma rituals, Dharma Shastras like Yogashashtra – Indian Yogic Science, Vastu Shastra – the study of construction based on the elements of Vastu, Jyotish Shastra – Vedic astrology including the study of the planets, its interference with the birth stars, the zodiac signs etc. The Peeth has it’s Sanskrit college “Swami Brahmandand Mahavidyalay” which is the only Sanskrit college in Goa offering degree courses in Sanskrit and other Dharma Shastras.

In a Social arena, Sampradaya has done a remarkable job. By conducting grand events like “Vande Mataram” which was held in Mumbai, Goa & Nasik united thousands of people irrespective of religion, caste & creed to create awareness about the essence of the unity needed for the development of the nation. The Peeth tries to enlighten the different sections of the society which lead to the empowerment especially of the youth and women. These activities have led to making women realize their true strength and helped youth to organize their life in a better way.

Today, H.H. Dharmabhushan Sadguru Brahmeshanandacharya Swamiji who is instrumental in lifting the Peeth to a great height succeeded in illuminating the minds, the souls and the bodies of thousands of devotees with P. Sadguruji’s divine activities. With the divine foresight of P. Sadguruji, the Peeth is determined to transform the whole society into a place where people could live in peace, love, and brotherhood in a harmonious atmosphere 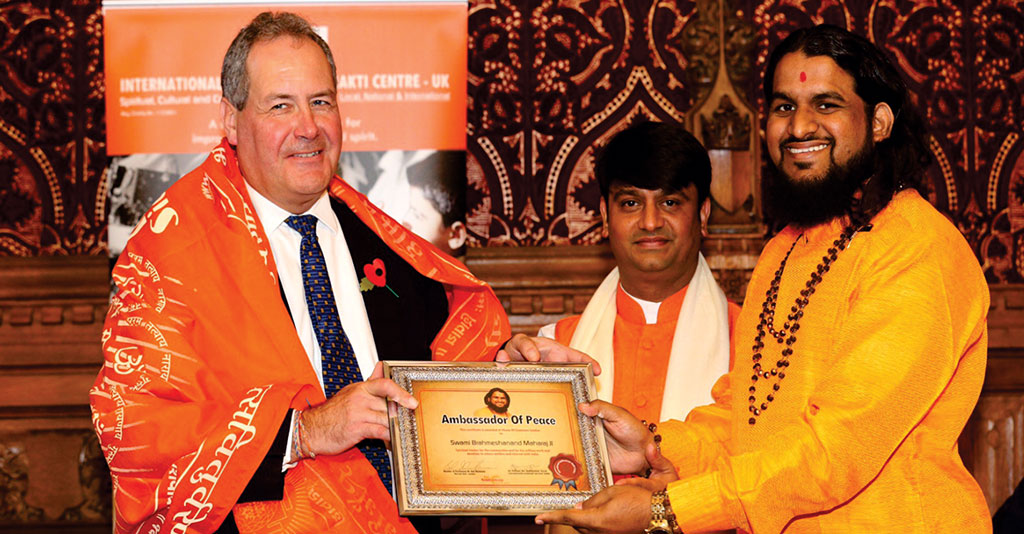 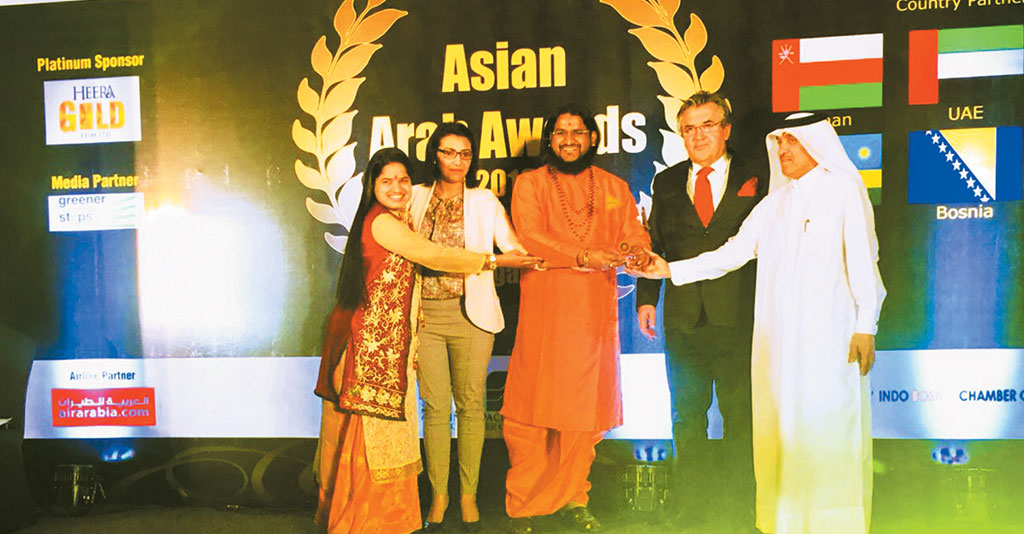 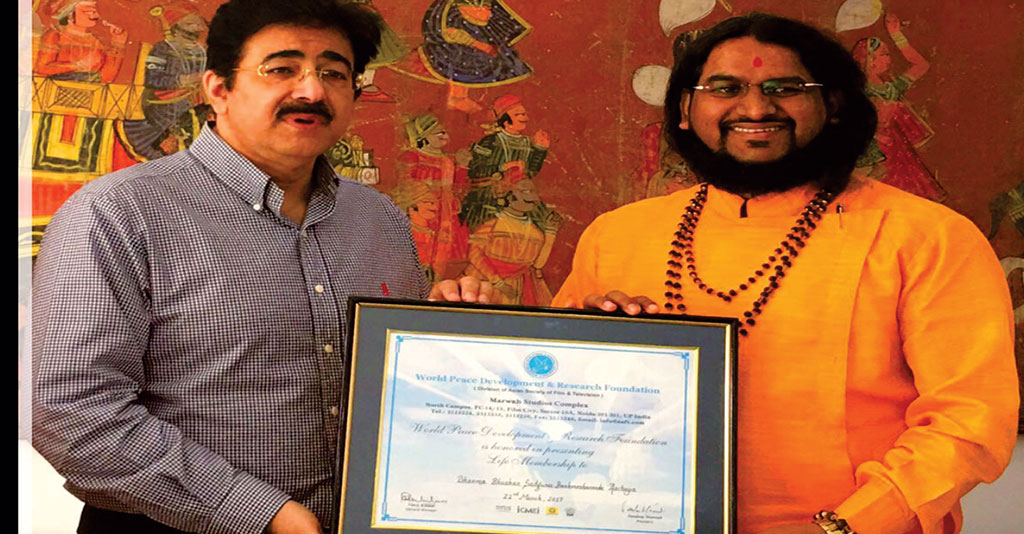 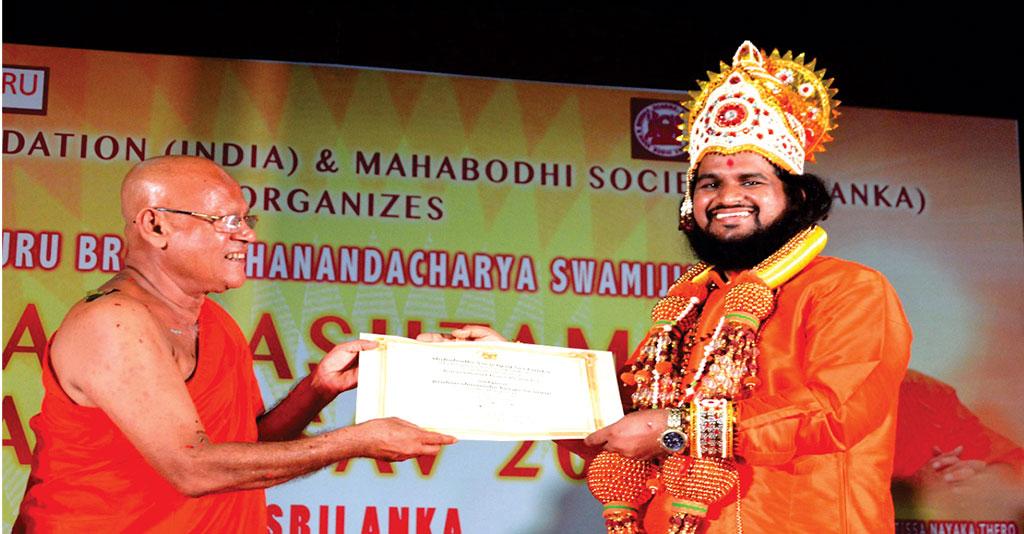 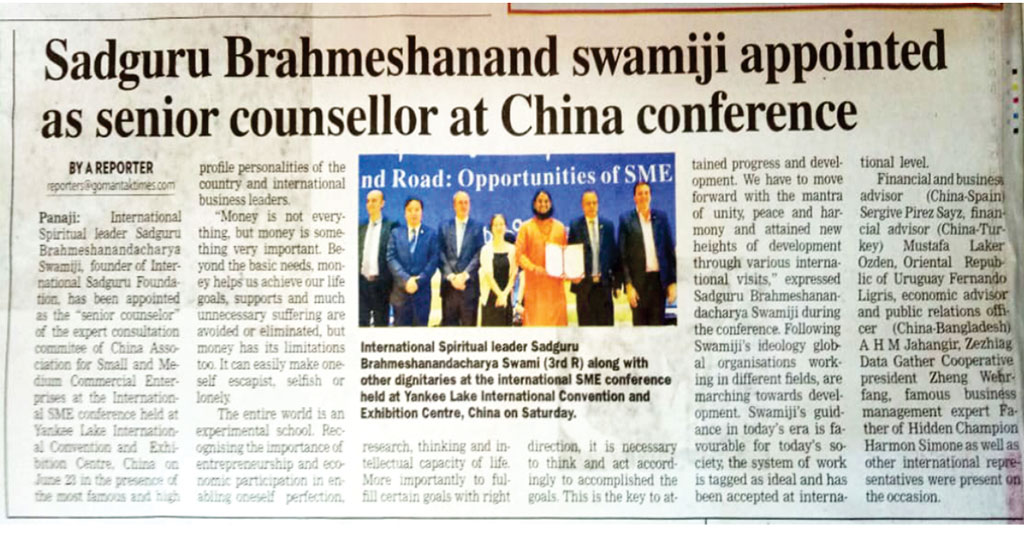 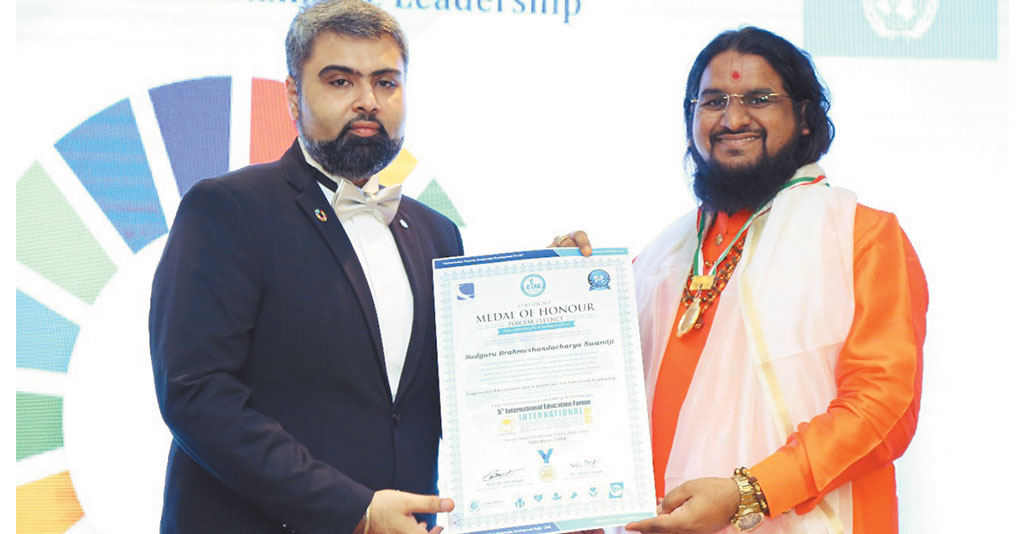 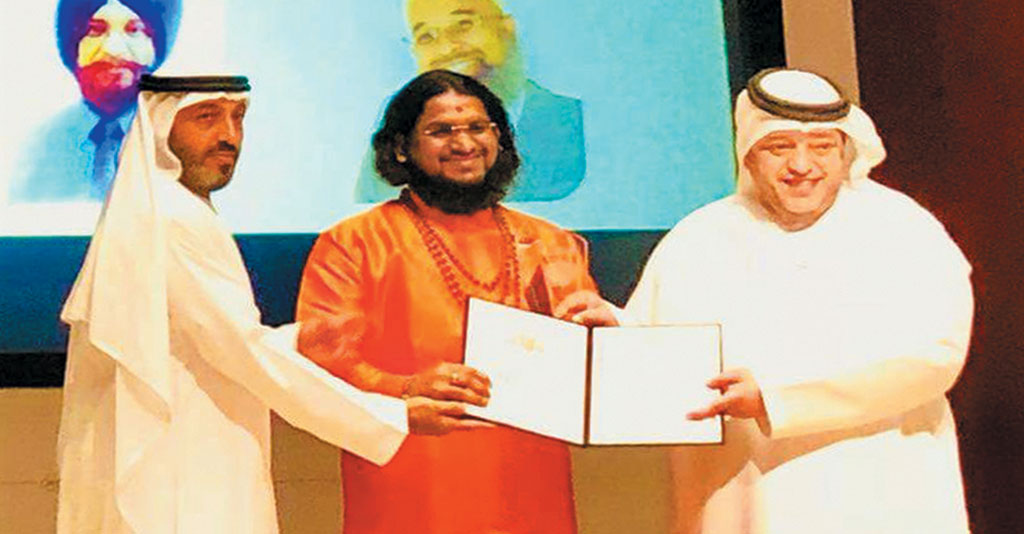 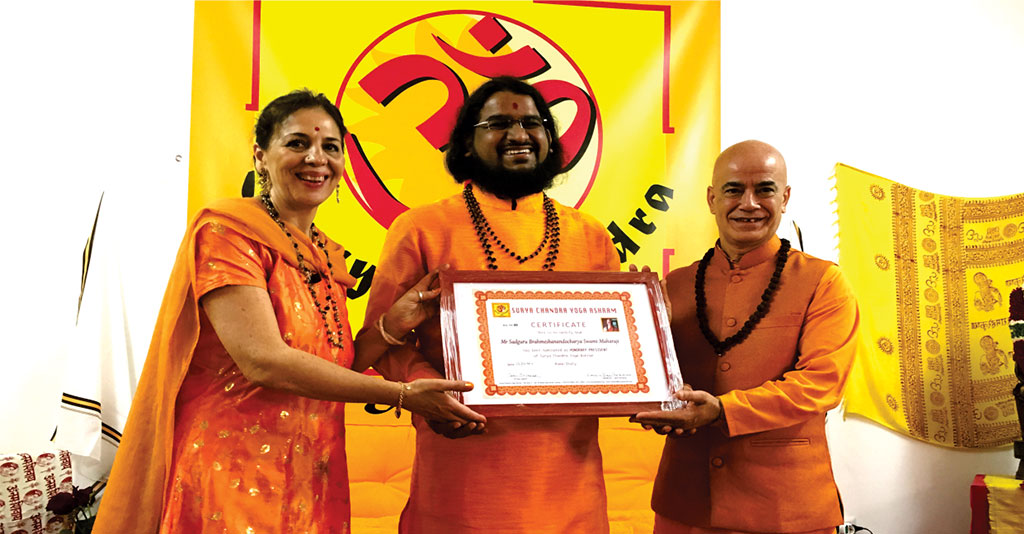